"First friends, then artists."   International since 1980. 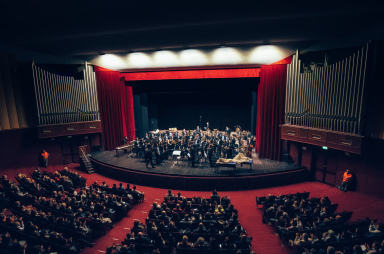 The Banda Musicale Monastir (Monastir Wind Band) was born in 1980 in Monastir, Italy and performed for the first time on Easter Day in 1981. Since then the band has carried on with its artistic and cultural activities without interruption, offering musical training courses and concerts all over Sardinia and outside the region's borders.

The band, conducted by Maestro Alessandro Cabras, is currently working hard to  expand its original band repertoire and to study the traditional Sardinian folk music. The band is also engaged in an intense concert season.

2006 - The band took part in the 9th “La Bacchetta D'Oro” National Band Competition in Frosinone, Lazio, winning the 1st prize in the third category and the Ciociara Musical Union “Benito Pica” Prize for the best score in all categories.

2011 - The band took part in the 5th edition of the Sinnai International Band Competition, winning the 1st prize for the second place in the third category.

2012 - Another important and prestigious goal: the band won the 1st prize in the second category at the 14th “Il Flicorno D'Oro” International Music Competition. It came second among the 51 participants of the European competition.