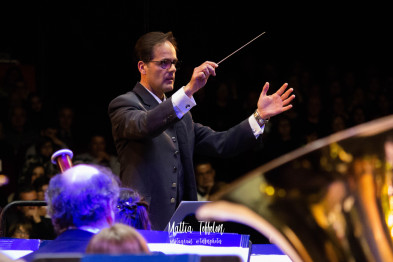 Alessandro Cabras was born in Cagliari, Sardinia in 1970. He began to study music at the age of 9 in the Banda Musicale Monastir. He studied Trumpet and graduated at the “G. Pierluigi da Palestrina” Conservatory of Music in Cagliari, under the guidance of Maestro Enzo Morandini. He attended post-graduate Trumpet courses with Maestros Mauro Maur, Sandro Verzari, Paolo Fresu, Lester Bawer, Davide Simoncini and post-graduate Conducting courses with Maestros Daniele Carnevali, Francesco Pittau e Hardy Mertens.

He worked in the orchestra of the Fondazione Teatro Lirico di Cagliari (Cagliari Lyric Theatre). He taught music education in middle schools and in music workshops in primary schools in Isili and Nurallao, Sardinia.

In April 1999 he conducted the Associazione Musicale Stanislao Silesu (Music Association in Samassi, Sardinia) in “Alternances” by André Waignein at the Concert for Young Directors, promoted by the same association. From 1998 to 2003 he conducted the Banda Musicale “G. Verdi” (“G. Verdi” Wind Band) in Sant'Andrea Frius, Sardinia, with which he won the 1st prize in the third category at the 4th “La Bacchetta D'Oro” National Band Competition in 2000. In 2001 he was entrusted with the Art Direction of the Banda Musicale Monastir. Since then he has taught brass, music theory and solfeggio in the association's music training courses.